From mid-April to mid-November, all across Alberta there are hundreds of blue ponds which residents and visitors attend to for recreational purposes. These ponds and lakes are used by outdoor enthusiasts who will canoe, kayak, boat, fish, swim, hydroplane, scuba dive and more throughout the year. And when the temperatures dip below zero degrees and the blue ponds and lakes turn into sparkling dazzling ponds of blue ice, most of those same people just change their clothes and continue their great outdoors adventures. 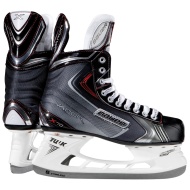 Nearly 4-years ago, in my late 30’s I bought my first pair of Bauer ice skates. It’s common knowledge that adults have a more difficult time learning new activities the older they get. Especially when they may hurt themselves from the activity they are attempting. Mainly because they have to go back to work the next day. As a guy who is already 6-foot 2-inches, I know injuries are possible as I self-taught myself in my early 30’s to snowboard. There were many occasions when I would catch an edge, and wind up smacking several body parts against hard mountain surfaces experiencing those concussions, torn ligaments and dislocated shoulders.

So, add an extra 3-inches to my total height, due to skate elevation and yea, I get the hesitation of learning this new activity called Ice Skating. Especially when the only real protection for you is a helmet and the rest of your body is going to land on the hard crisp clean surface of a frozen rink, pond or lake.

Learning how-to ice skate is a fairly simple concept. Put on a pair of ice skates. Go onto an ice rink. Push off with your right foot, glide. Push off with your left foot, glide. Keep alternating, cross one leg over in front of the other as you slowly turn to your right or your left to continue along the path towards the other end of the rink. When you want to stop, you simple turn one foot inwards quickly to create a pseudo triangle as you would if you were skiing and the ice will simply slow you down until you are stopped.

On my first trip to the hockey rink, I could not get my skates tied up tight enough around my ankles. The boot was sooooooo damn tight and rigid. I pulled and pulled and pulled on those boot laces until my fingers bled. I wanted to give up before we even reached the ice. My wife calmed me down. Sat in front of me and tightened up my boots.

When I stood up to walk out of the change room and to the ice, my legs were super wobbly being on the 1/4-inch blade. I braced myself using the wall to walk around the corner and out to the rink. Stepping onto the rink, I nearly fell backwards into the hallway which we had just come out of. The ice was far more slippery then I had expected. Both blades onto the ice and I began sliding around, awkwardly and slammed into the side board. As soon as I hit the board, arms waving, legs moving, three kids under 10-years old went by at lighting speed and I hit the floor, HARD!

Soon after the near miss, my wife was explaining how-to push to get myself to move. Gingerly, I moved one leg and pushed moving forward slowly until the other leg decided to go another direction and WHAM! I hit the hockey rink floor for the second time. Ouch! That hurts.

Getting up, I moved slowly across the rink. Towards a section cordoned off for the “beginning skaters”. These were REALLY little kids, like under 5-years old, who have never skated before. Each of them had this little metal purpose built skating aid. My only thought was maybe this will assist me in learning how-to skate, even if it was only up to my keen caps. I grabbed onto one and started pushing away. Fifteen minutes later, I had the concept of skating. Could I put this to practice? I ditched my skating aid and headed for the “Big Rink”. As soon as I crossed that imaginary line those same three 10-year olds, came swooping by, SPOOKED me with their swishing skates and I hit the floor once more!

That’s when I gave up and went for the change room. We’d been on the ice for less than an hour. While I pouted getting off the ice, my wife went for a spin. Doing twirls, jumps and turns like a pro figure skater. People at the rink complemented her on her skating. That’s when my jaw dropped. If she can do this, then I can do this. And back out onto the rink I went. I must have fallen another dozen times that day. My body black and blue from the numerous trips to the ice. What I realized on that day, is even as an adult you need to remember those motivational slogans;

It’s been about 4-years since the above day of “failures” happened. I think that year we only went out another 2 or 3 times. In my second year, we went maybe 8 times total. Last year about half that. This year we’ve already been out 5 or 6 times and it’s only Mid-January. Everyone around me says my skates are still not broken in and I need to do another 40-hours or more on the ice before those boots will loosen up and feel comfortable on my feet.

I finally learned how-to tie up my own skates. And can retighten them whenever I want to. I have learned to watch the younger kids who are teaching me lessons on how-to push off on the skate, what the form of my body should be, how-to be more agile on my skates and how-to attempt the crossover in the corners to turn through the corner and continue at my current rate of speed. In the past week, my wife has been teaching me how-to use both right and left skates to stop myself while at speed instead of just gliding to a slower speed, before stopping. Learning to ice skate has been an adventure and I will continue to work at it, as its both a great outdoor activity and an awesome cardio workout.